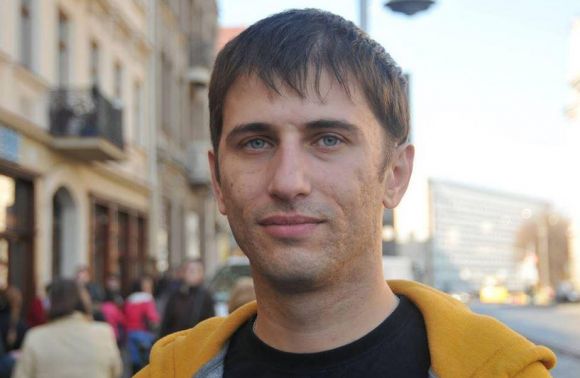 For the past several years, Lviv native Sviatoslav Litynskyi, a programming instructor, has been defending the right of Ukrainian consumers to Ukrainian-language services and product labeling.

His successes include a Ukrainian passport without a Russian translation, Ukrainian-language bank receipts, the labeling of household appliances and electronic equipment in Ukrainian, and an apology from Minister Arsen Avakov for using Russian in speeches at the Ministry of Internal Affairs. The civic activist uses courts to defend the rights of Ukrainian language consumers. And he wins most of his cases.

Some consider Litynskyi an eccentric, some believe now is not the right time to bring up the language issue, others say that he should not be wasting his efforts on the courts.

The Lviv native’s history as defender of the rights of Ukrainian consumers began in 2012. At that time the parliament had adopted the law “On principles of state language policy.” Litynskyi had just purchased a washing machine from a well-known company which did not provide labeling in the Ukrainian language. He returned the machine but at the same time also filed a lawsuit in court, which he won. Now several washing machine manufacturers are already labeling their products in Ukrainian. He also won the case against Pryvatbank. The bank had issued an account statement and a receipt in the Russian language. A similar situation occurred with a receipt issued by a cafeteria. In both cases, the language was changed to Ukrainian after lawsuits.

Sviatoslav Litynskyi became the first Ukrainian to receive an internal passport that did not include a page in the Russian language. Thus, he set a precedent and now all citizens have the same right. But this was preceded by a court trial that lasted eight months.

He also sued the Ministry of Internal Affairs after it had refused to give him a Ukrainian translation of speeches given by Minister Arsen Avakov. After a positive court ruling, the ministry’s official YouTube channel now includes a Ukrainian translation of Avakov’s speeches. However, for Litynskyi the most important thing was to draw attention to the fact that civil servants are obliged to comply with the Constitution and speak Ukrainian.

“If I am a citizen of Ukraine then I am supposed to be served in the Ukrainian language in a state where the Ukrainian language is obligatory. The rights of the native population must be ensured. We are fighting for the rights of the majority. If the state institutions worked, they would have responded to my appeals and thanked me for my letters pointing out the violations of the law and (assured me) that they would correct everything. But the officials don’t want to do this. It’s a vicious circle in the country,” he says.

Ukrainians like to be served in the Ukrainian language, as evidenced by various public surveys, but in real life few pay sufficient attention to the matter. To set an example, Litynskyi won a lawsuit against an online store that sold laptops without a Ukrainian keyboard. The laptops were labeled only in English and Russian. “We are not a colony to be addressed in a foreign language,” he says. “I won the case. This is a landmark court decision; it sets a precedent.” Now one of the companies is already selling laptops with Ukrainian keyboards.

However, Litynskyi lost his most recent lawsuit against the National Television and Radio Council in the Lviv District Administrative Court.

“We monitored two TV channels that were not obeying the law and had broadcasts with only 17% national production instead of 50%. We wrote to the National Council, asking it to respond to this fact and to penalize the station, but we were refused. Therefore, we appealed to the court. The Judge of the Lviv District Administrative Court Maria Kedyk dismissed our lawsuit, so now we are bringing it to the Court of Appeals,” he says.

Litynskyi’s wife provides moral support for his defense of the Ukrainian language and lawyer friends help with the lawsuits. For him, it is a matter of principle and also proof that one person is able to change certain things. He is not alone in this fight. In Mykolaiv, Anatoliy Ilchenko, a retiree, also files numerous lawsuits against officials who violate the Ukrainian language law. He has already managed to bring about many changes in the Mykolaiv oblast center.