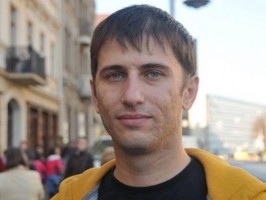 For the past several years, Lviv native Sviatoslav Litynskyi, a programming instructor, has been defending the right of Ukrainian consumers to Ukrainian-language services and product labeling.

His successes include a Ukrainian passport without a Russian translation, Ukrainian-language bank receipts, the labeling of household appliances and electronic equipment in Ukrainian, and an apology from Minister Arsen Avakov for using Russian in speeches at the Ministry of Internal Affairs. The civic activist uses courts to defend the rights of Ukrainian language consumers. And he wins most of his cases. END_OF_DOCUMENT_TOKEN_TO_BE_REPLACED